Being one of 7 wazungu here is not easy. All of us left family, friends and loved ones to come here.  This is not our culture, our language or the food we’re used to.  We wake up to the sounds of different birds, different shades of light and having to boil water to have a warm bath.  We go to sleep to the screams of the bush babies (small arboreal, nocturnal primates), buzzing, malaria-ridden mosquitos and “things” rustling in the bushes outside our bedroom windows.  We’re not in Kansas anymore.

Berega sunset. Took this on one of my long treks.

It is difficult being on the flip side, being the minority both in skin color and culture.  It’s quite humbling, to say the least. We are constantly reminded of our color by the calls of the village kids as we walk past. “Mzungu! Mzungu!” It’s the equivalent of seeing a black person or Asian person and calling out “Hey! Black guy!” or “Hey! Asian lady!” The village kids don’t mean any harm. They just want to wave and say “hi” or “bye, bye” – the only English words they know. They might even take your hand and walk a ways with you. If you’re carrying a camera they always want to “takea pickcha.” Still, once you’re on your way you again hear, “Mzungu! Mzungu!” 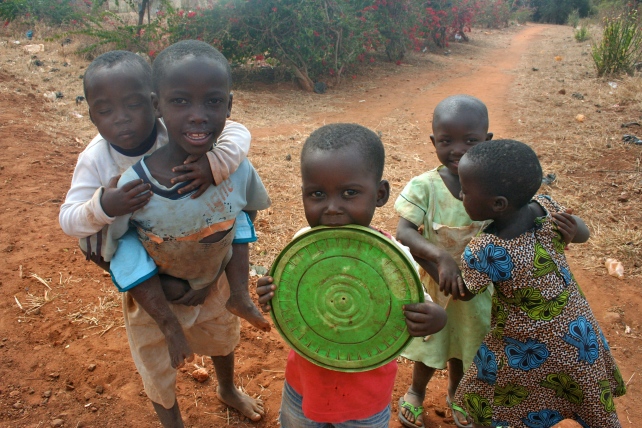 More village kids. Anything functions as a toy.

The adults are harder to take. You get stared at every step you take, every place you go, every day you’re here. Mind you, staring isn’t considered impolite here, so they aren’t being rude, but it gets real old, real fast. I mean, really! Do I look that much different today than when I walked past you yesterday? What especially bothers me is walking past a group of people (usually men sitting around doing nothing), having all conversation stop, then hearing the word mzungu in their conversation once you’ve passed, but are not out of earshot. That’s the worst, and it happens every day on my walk to work. The women are always busy carrying heavy buckets of water or other cargo on their heads and have babies strapped to their backs. But they, too, will stare.

Going to the market, getting a pikipiki (motorcycle taxi), regular taxi or even just a beer involves what Liz refers to as a skin tax. There’s always an attempt, often successfully, to charge us more because we’re white. A common tactic is to tell us they have no change. I’ve started either carrying exact change or following the guy around until he finds some buddy of his who has some. No one ever does until they realize the crazy mzungu lady isn’t going to go away until she gets her change. Miss that minivan to town that has 18 people and a chicken? Hamna shida, no problem! There’ll be another along in bit with 20 people and 2 chickens? I can take that one. Again, this is usually the men. The women don’t do this very often. My Kiswahili is good enough (i.e., I know my numbers and a few key words) to be able to argue about a jacked up price and win. Self defense.

But, I’m not one to just let things remain status quo if I don’t like it and can do something about it. I’ve started saying habari, salama or shikamoo to the people I see. Culturally, greetings are extremely important. The Tanzanians are a friendly people and I always get a reply and a smile back. The pikipiki drivers are beginning to recognize me from seeing me on my long walks into the bush (I can be gone for hours). Several are starting to wave and call out “habari yako, how are you?” “Nzuri sana! Asante! Everything’s great, thanks!” 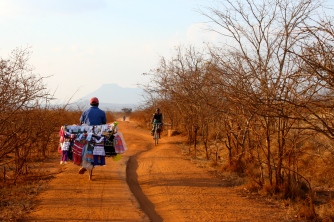 A man from the village who sells children’s clothes. He stopped to chat during one of my walks.

This is true of all age groups from Berega and any of the surrounding villages. I’ve even had a chat with a couple of those scary Maasai warriors. They are actually very friendly and like to laugh. Okay, maybe it’s at me, but it’s also with me so…I’m good.

My little tagalongs. They sometimes follow me, and have decided I need to learn Kikaguru, the tribal language of Berega.  I teach them English.  The dirt becomes our chalkboard, the trees, mangos, birds and everything else becomes our classroom.  They don’t call me mzungu anymore.

I might be mzungu, but I’m finding that in addition to our students, a few “regulars” are starting to call me mwalimu, or “teacha”, instead of mzungu. Though I’ll obviously never fully be a member of Berega, I am beginning to be accepted as a part of it. They know we are here to help their kids. Our student’s parents see a difference between what our students learn and what the government school students learn. They want us here. Yet, every new wave of American teachers is an oddity and there’s going to be an awkward adjustment period.

The cultural stuff isn’t so bad (except the staring, I’ll never get used to the staring). There are a few things to get used to. For example, the minivan taxis driving at break neck speeds on the left while you’re sitting with some stranger on your lap and a chicken next to you in a minivan designed to hold 9 but you counted 20. And, are they trying to add another person with a chicken? What’s with the chickens, anyway? Yes, it is possible to stand in a minivan.

Samweli, who often needs an eraser. I just love this kid’s smile!

It’s a bit disconcerting when a 10-year-old boy asks for a rubber. When you ask why, he tells you he made a mistake. I resisted the temptation to tell him he was a little late just long enough to realize he meant he needed an eraser (whew!). However, I think I’ll pass up the offer to eat rat or a piece of that goat that’s been hanging outside the cafe since forever.  Mango season is approaching and I can’t wait to eat my fill on one of my walks. Right now I’m enjoying the bounty offered by the ukwaju (tamarind) trees. Tomorrow I’ll make a sweet drink from mapera, the seed pods of a baobab tree. I actually kind of like wearing skirts all the time. It’s winter, but it’s still hotter than Bay Area summers so skirts are quite nice. Besides, I can wear all the bright colors I want here. The brighter, the better – I love it! Year-round sandals or bare feet, life at a leisurely pace, great students, time to relax, and long evening or morning walks into the bush.

This mwalimu mzungu is adjusting and loving every minute. Well, almost. I still wish I had my own “hut.”

Yup – that’s the goat just hanging right out there. In the heat. With the flies.  Could be dog, for all I know. 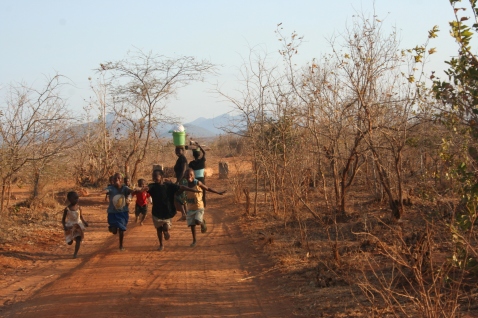 My tagalongs goofing off.

My final destination. I’m looking for the baboons (nyani). 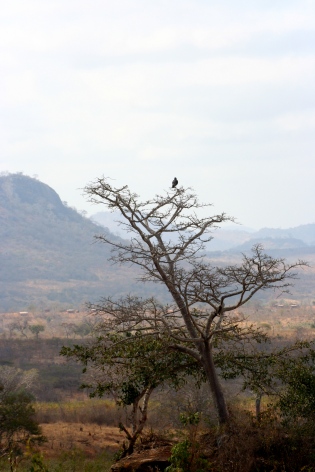 Caught the hawk in flight! 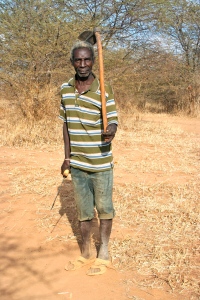 This is Nelson. He carries a machete and a hoe in hopes of being hired to clear brush.

This is Amani. I don’t know if he carries passengers on his pikipiki, but he did stop to ask me where I was going.

This sweet girl is Zahara. I wish she could’ve gotten an education at an early age. She’s quick and smart. As it is, her life will probably be a difficult one.

Young boys bring the cows and goats home every evening.

Re-entry into Berega. This is one hub. The other is the hospital (such as it is).